When Do Cats Stop Growing?

Home » When Do Cats Stop Growing? 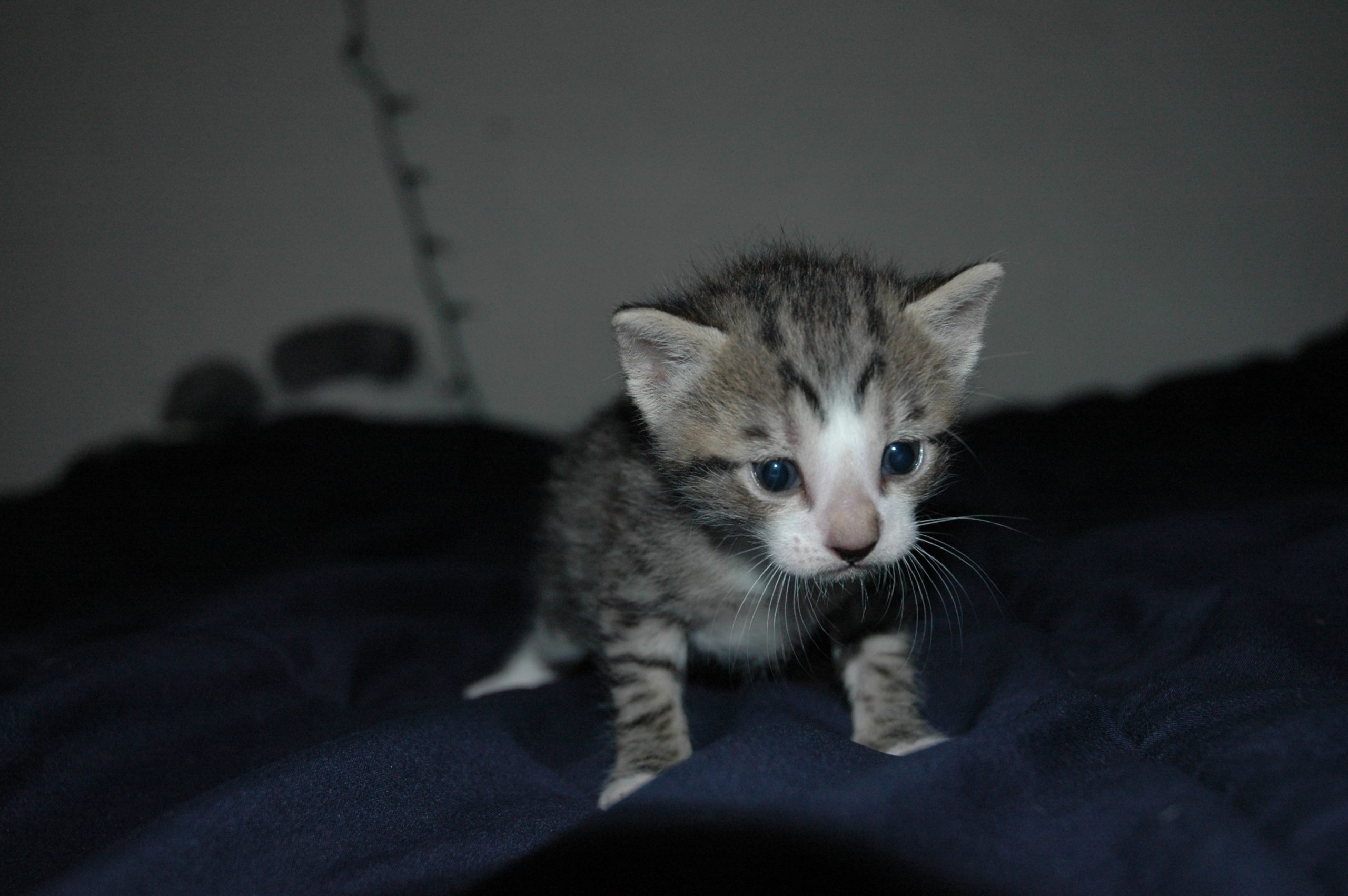 Cats are one of the most popular pets in the world, but how much do you really know about them? Kittens are born with their eyes closed and they can't see for six weeks. .

Kittens grow the most in the first three months of their life, which is why it is crucial to its development as it will develop mannerisms and personality traits that it will have for its entire life. In the first three months, it's also important that cats aren't separated from their mothers until at least 6 months old.

Getting pet insurance while your kitten is under 6 months old is a smart idea if you want an expert opinion to determine how big your cat will get. They can also recommend the best kitten food for growing kittens. It may not seem important now, but proper cat food can be a lifesaver for when your cats reach their full size.

A little backstory on the cat's growth cycle for you guys. When our momma cat, Naz, had her babies, we actually got to watch them being born, and have seen their entire growth cycle. I can't tell you how many times we thought they were done, only to find out they are still getting bigger. Once they reached their adult weight they kept eating and we had to be really carefully with the adult food that was fed, especially after getting them neutered, as it stimulated a greater appetite for them.

While 12 months may be the average time for cats to stop growing, Yaki was more like 15 months.

If we are looking for the factors that affect how fast cats grow, then there are a few of them. The first one being genetics and health. If your cat is predisposed to having a higher metabolism or has poor nutrition from food sources, they will grow more quickly than other cats who have good genes but also healthy eating habits. Another factor affecting growth rate is the cat's breed. Cats born from larger breeds tend to be larger adult cats, if you can imagine that.

These two factors can be affected by diet as well as activity level which will change day-to-day depending on if it's playtime or not. Kittens should get about 25% of their calories from protein with an average proportionate amount from fats and carbohydrates (this comes out to 60g per 100 lbs). They need high levels of nutrients because they have a higher metabolism and are growing so quickly.

Cats follow somewhat of an exact growth pattern: their first three months, then one year when they stop getting bigger but continue to get heavier as my momma cat Naz has shown us through her own litter. Cats usually reach full weight by about 18-24 months, which is another reason why it's crucial for kittens not to be separated from their mothers during those first few months. The time between birth and "full size" varies depending on breed, gender, food intake, genetics, environment climate/temperature changes in general... All that stuff!

Some Cat Breeds Grow Faster Than Others

Many cat breeds grow faster than others because of their genes. For example, breeds like a Russian Blue is most likely going to be smaller and weigh less due to its gene pool. And just like with any other animal or plant that grows rapidly during certain seasons, this would mean they will not have as many calories being consumed which could lead them to become malnourished if they aren't taking care of properly.

The Maine Coon breed on the other hand can reach up to 27 pounds at full size in only 12 months! I’ve never seen anything like it before – my cats are all between 8-16 lbs and I can't imagine a cat that big. Imagine hitting 12 pounds and your cat will continue to grow. Shout out to all the Maine Coon owners reading this, you guys have a lot on your plate!

Can You Tell How Big A Cat Will Get?

There are a lot of factors that go into how big your cat will get. Some people think you can tell the size of a kitten by looking at their parents, but this isn't always accurate. Naz, for example, is pretty small, at least in comparison to Yaki and Yavapai.

The best way to judge is by weight and height, so measure how many inches they are - if they weigh more than twice what they should for their age and height then it's likely they'll keep growing!

Ways To Know When Cats Reach Their Full Size

The easiest way to tell if your cat has reached their full size is by weight and height. If they are more than twice the ideal weight for cats of that age or height then it's likely they will keep growing.

Another good indicator is when you start noticing differences in how big parts of their body look, like a longer spine as compared to a kitten’s shorter one! Now, on this topic we have another anomaly to discuss, and that's cat's with deformities.

Our little guy Pima never made it to the size of his brothers. He's cursed with short legs that makes him adorable, though he has problems jumping. So, if you only have one cat and can't compare him to his siblings, always keep in mind there could be something wrong with them.

And don't forget about teeth - typically around 12-14 months old, those first adult teeth come in which signals an end to growth but not necessarily adulthood/maturity. Cats also stop maturing at this point because they have fully developed physically and can now focus on other things such as behavior and personality traits (which may be influenced by their genes and environment).

This is when it's time to watch out for their first heat cycle, which can be a real treat, even if you think you are prepared.

When Do Cats Stop Growing?

The Life Cycle of Cats

Cats will grow the most in their first three months, then continue to get heavier after they stop getting bigger.

Most cats reach full weight by 18-24 months old and are considered adults at this point. They can be identified as an adult when you start noticing differences in size from other parts of their body like a longer spine or permanent molars coming in. Cats also mature around 12-14 months old which is when it's time for them to go through their first heat cycle (though genetics and environment may influence these traits).

Short answers: 2 years old is when cats will be fully mature.

Developments In The First Three Months

Cats will grow the most in their first three months.

The size of a kitten's head at birth is about two thirds the length of its body. By other comparisons, when they are fully grown it’s only half as long which means there was some big growth happening over those few short weeks!

Cats will grow around 15% each month during this period.

Their muscles and bones are still very soft, so they might not be as strong or coordinated yet but it's important for them to start playing now rather than later because it helps their development. This is when cats start feeding off proper cat food and are weaned off their mothers breast milk. Expect some difficulties with this, some cats really enjoy breast milk.

At 18 months old cats reach full weight, though this can vary by breed (Maine Coons have been known to get bigger in only a year!). They also stop growing at that point which means the size of your cat won't change after about one year from when you got him/her! Cats typically mature around 12-14 months old too - there should be an end to growth and beginning of adulthood here with first signs of heat, so get them fixed!

Usually when asked "when do cats stop growing?" we get a few follow up questions. Here's the most common ones for those that are curious:

My Kitten Is Chubby. Will She Be Big?

This can be a tricky question to answer because the size of your cat at one year will depend on their breed as well! If they are overweight then you should consult with an expert about them and make sure that there isn't some other issue going on.

Is A Cat Full Grown At 6 Months?

This also depends on the breed of cat, but you can be safe assuming your kitten is full grown by about 18-24 months old. If they are still small then it's probably because their body hasn't fully developed yet and there isn't anything wrong with them!

Will My Cat Keep Growing After 8 Months?

No, cats stop growing when they are about 12-14 months old and reach their full size by 18-24 months.

Neutered cats grow to the same size as their un-neutered counterparts. Spaying or neutering a cat will not affect how fast they grow or when they stop growing.

When Do Cats Reach Sexual Maturity?

There you have it. Our tips for understanding your cats growth cycle. I hope we didn't bore you with our own personal details too much and you learned something from the article.

The Fairness To Pet Owners Act

In 2019 Congress passed The Fairness To Pet Owners Act. This act has helped pet owners to choose where to purchase their prescription pet medication. The real goal of the bill was to make prescriptions for pets more affordable. If you have pet insurance, you already know how expensive medications can be. The Fairness To […]

Read More
How To Stop Cat Shedding Once And For All

What cat parent doesn’t want to reduce their cat’s shedding? Loose cat hair is kind of annoying. How does it get in the refrigerator anyway? It seems like we’re always having to vacuum and use a lint roller. Petting our kitties gives us a handful of fur that goes flying everywhere. Improve Their To Stop […]

Read More
Why Does Cat Poop Smell So Bad?

We all know that feeling. Foul smelling feces creeping out from the cats litter box. It's not pleasant, and those "scented" litter brands really don't help much. But what is there to do really? They have to go somewhere. Outside of cleaning your litter daily, a cat litter box just seems like something that's always […]