Why Do Cats Rub Against You?

Home » Why Do Cats Rub Against You? 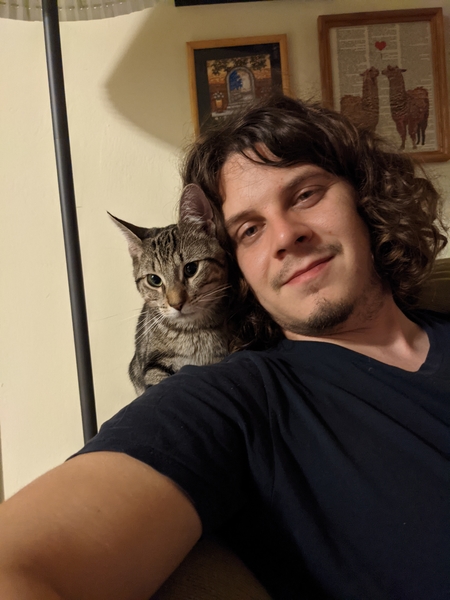 Cats are notoriously independent, but they do appreciate the occasional pet. You might have noticed a cat rubbing against you and wondered why they're doing that.

I've always wondered why they do that. After doing a bit of research, it turns out there are a few reasons. Some cats like to be scratched and petted in order to feel content. Others might be marking their territory by leaving behind their pheromones or fluids from glands in their face and paws. The rubbing behavior is also used as a greeting ritual between loved ones, which my cat Yavapai often uses.

Now I will discuss each of these rubbing behaviors, with more information about how and why these behaviors are common in cats.

With their bushy tails and fluffy whiskers, cats are adorable creatures that warm our hearts. But don't let those unsuspecting eyes fool you. When my cat does this, it may seem like he is just trying to be friendly and show a sign of affection by rubbing against my legs or chin, but in reality, he has got a purpose for touching me so much, and that is marking.

Cats are territorial animals, and they do whatever it takes to maintain their space, which is a typical animal behavior. Cats have scent glands in their paws that are unique to each cat, and may be rubbing against us to mark their territory.

Our cats can leave their scent on us by rubbing against us, leaving behind a sliver of evidence that they were there. Cats have glands located all over the body, and when our cats rub themselves on things such as plants or humans, they leave behind a marker for others to follow to find out where this cat has been.

Cats all live in a world of smell. The air is full of messages that they can't see but detect by sniffing and tasting the molecules around them. Cats mark their territory through spraying. In that spraying, the cat leaves pheromones, but these pheromones don't stay fresh forever, so cats rub their body against us from time to time to renew that scent.

Sometimes when I am not in a good mood, my kitty starts head butting me to show affection. They do this because they feel safe with us, and it's a sign that says, "I love you." Cats rub against us when they want to be showered in affection or become more comfortable around new humans who seem like potential friends. The cat purrs as she gets close, which is her way of saying hello.

Cats are our best friends because they care for us and show their love in many ways. Cats display affection by rubbing against us to make themselves feel more comfortable or happy, which makes both happier. In Yavapai's case it also usually means he wants a head rubbing!

I've always loved my cat's company; whether we're hanging out watching TV together or she just comes over to rub against me when I'm feeling down, my little furry friend knows how much it means that she chose me as her human family member.

Our cats are naturally drawn to the smell of themselves and will be comforted by a familiar odor. Cats are known for avoiding both human and animal scents, but they enjoy the smell of their own because it makes them feel safe. Not only does a litter box with dry litter maintains that "scent," but when they rub themselves around us, they leave their scent, which later when they recognize they feel at ease.

Our cats are very confident and use this method to try and learn more about the person they just met. They do this by sniffing and tasting; their rough coat sleeves get an impression of the person's scent on themselves, so it is one way to identify potential friends or enemies in new territory.

Some experts say that cats don't always rub on people to show affection but instead are looking for something from us, such as food or attention. My cat rubs against me when she wants to know whether I brought something for her from the market or not.

Cats who live in multiple cat household environments will usually rub and headbutt each other. This behavior is often seen when they get to know one another or extend what they would do naturally with their mother while growing up in a single-cat household.

Our cats will also start head butting with us, but they aren't saying "hello" like we are–they're exchanging scents and marking their territory.  It is usually right after waking up from napping or when treats have been served that the ritual takes place among felines close to one another in age and status (rather than those playing).

Sometimes my cat rubs against me because he wants something. Sometimes when I am at home, it feels like there are little ants running all over the place, and that only goes away if you pet them or give them some food. Sometimes a cat rubbing against me means something a bit worse. In Yavapai's case, he starts head rubbing and meowing more consistently to let me know it's time to clean his ears!

Sometimes my cat approaches, I can feel his desire to be pet or scratch under the chin. He never fails in getting what he wants as soon as possible and will always come back for more if I don't give it to him then and there."

I'm not sure if you've ever noticed this, but cats rub against us for several reasons. Cats will often rub their heads and backs on us because they want to greet us, to mark territory (especially when they're in unfamiliar places), or simply because it feels good. They'll also do it when they need something, maybe food or water, or just want some extra attention. This might seem like such an odd behavior at first glance, but there are actually many different possible explanations behind the act. If you've never thought about why your cat does what she does before now, I hope that these thoughts have given you new insight into her world!

The Fairness To Pet Owners Act

In 2019 Congress passed The Fairness To Pet Owners Act. This act has helped pet owners to choose where to purchase their prescription pet medication. The real goal of the bill was to make prescriptions for pets more affordable. If you have pet insurance, you already know how expensive medications can be. The Fairness To […]

Read More
How To Stop Cat Shedding Once And For All

What cat parent doesn’t want to reduce their cat’s shedding? Loose cat hair is kind of annoying. How does it get in the refrigerator anyway? It seems like we’re always having to vacuum and use a lint roller. Petting our kitties gives us a handful of fur that goes flying everywhere. Improve Their To Stop […]

Read More
Why Does Cat Poop Smell So Bad?

We all know that feeling. Foul smelling feces creeping out from the cats litter box. It's not pleasant, and those "scented" litter brands really don't help much. But what is there to do really? They have to go somewhere. Outside of cleaning your litter daily, a cat litter box just seems like something that's always […]